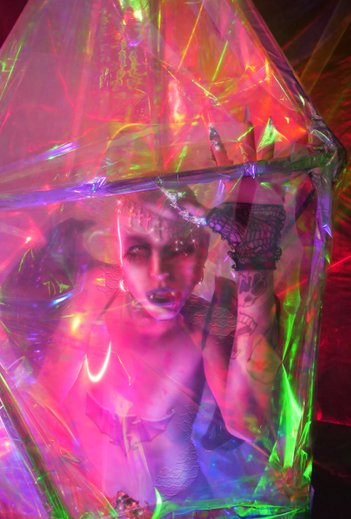 They have had many named, many forms, and have lived in many places. Some say they are as old as the string of time itself. There have been even more tales than there have been names, but two things are constant when hushed voices speak of this being: Blood and Water.

And there was the story of the people of Teh Amula’h, a nation hidden deep in the sweltering rainforests at the bank of an unknown ocean. What few records remain Teh Amula’h suggest that this civilization was well beyond the development of any others of its time. They had their own written language and infrastructures. They even knew the secret to bring those who had died back to life. All of this, and much more, these people owed to the deity they called “Cretina”.  Only the eldest and most respected people of Teh Amula’h were allowed to gaze upon Cretina’s face. They had built a giant temple of ivory, bone and gemstone. Beneath its halls ran miles of intricate waterways. In its centre stood a throne made of the salt in the tears of the mothers who had had to make their offerings.

Once a year, Cretina would swim through the underwater passages, into this richly adorned throne room and seat themselves on the throne of salt. Wordlessly, they would make their wish known, and it was the same wish every time: Bring Me A Sacrifice. The elders would open the doors of the temple, and lead in the youngest and best-fed men their tribe had to offer. Cretina would feed on these men, though no one truly knows how. All that is known is that the men would disappear completely.  With the sacrifice complete, Cretina would disappear back to their underwater lair, leaving behind two smooth rocks. Each of these rocks were covered in a few simple words, but these words brought the people of Teh Amula’h even more fathomless wisdom.

One night a bright light suddenly shone into the skies, originating from a far-away place. The people of Teh Amula’h had never seen something so brilliant, and became obsessed with trying to figure it out. “It is another god,” the young men at the edge of maturity all said, “it is our salvation”. For they knew not what would await them in the chambers of Cretina’s temple, and they were afraid. Under the deep cover of night, all the young men gathered and escaped through the waters in the temple, quickly building rafts and setting sail for the beacon of light. The next day Cretina sat upon their throne and demanded a sacrifice. “We have no sacrifice,” the elders said and wept, “they are all gone to chase the light”.  Cretina was enraged and cast the lands of Teh Amula’h in darkness before tearing apart the necks of every single living soul there. Cretina took back all of the wisdom that they had so graciously shared, and then set off after the young men. They soon caught up with each raft and let their rage be known to the men in unspeakable ways. With the last man dead, Cretina’s taste for revenge was still not quite sated. They set a new course for the strange light in the sky, hoping to quell their anger. But instead of bloody retribution, the beacon led to an ally…