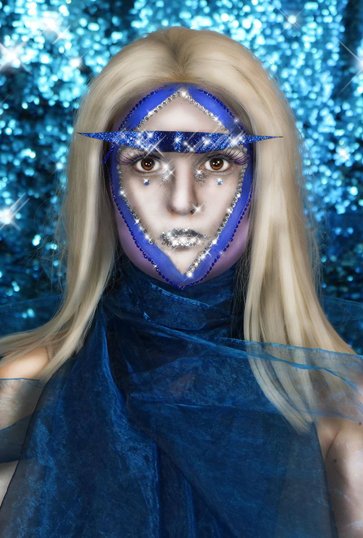 Once upon a time, a Light was born outside the universe, many aeons before the Big Bang. At ﬁrst she was very small. Flickering. Around her was only the vast blackness of the Nothing, and this Light had to try very hard just to stay alive. The Nothing would call for her and attempt to embrace her, but the Light wanted to do nothing more than Shine. Then, ﬁnally and after so much time, the Light saw that glorious explosion that set our universe into motion. Finally she had a direction, a clear path, and the Light started her long journey towards it.

Even travelling at the speed of light, it took the Light a long time to get to the ever expanding universe that lay beyond the Nothing. But oh how marvellous it all was when she ﬁnally got there. The glittering galaxies with their many stars and suns, and all the strangers who inhabited the planets in between. The beauty of it made the Light strong. She was no longer small, ﬂickering, and scared. The Light had found our universe and it had turned her into DiaManT, the brightest and strongest light to ever exist.

DiaManT became an avid explorer, wanting to see all that this universe had to offer. DiaManT saw everything, and for a while the act of seeing was enough. But then DiaManT began to feel a yearning. She no longer just wanted to see, she wanted to touch. She touched the suns, she touched the stars, and her shine grew stronger still. She started touching the inhabitants of all those different planets and she discovered that her gaze could change them. The effects of her contact would vary and she delighted in all of it. Some would welcome her shine, it would transform them into godlike beings, exalted above their peers. Others would see incredible things far beyond their imagination, a truth and beauty that only DiaManT could show. She touched people here on Earth as well, but earthly mortals were not as lucky. There was not one of them that would not perish beneath her shine, but they would welcome it regardless. “A Light! Oh what a glorious Light! There! At the end of the tunnel!” some would exclaim in the moments before death. DiaManT would make sure that they did not suffer. That they would experience their greatest joys and exhilaration, but death was unavoidable.

And then, something special happened. Among the mortals of Earth DiaManT saw someone else. Someone decidedly not mortal or human. A Princess born from a river, who stood on its banks dancing with the locals. DiaManT had not seen someone like this Princess before, and she decided to look some more. She watched as the Princess grew bored of mankind’s dancing, how the Princess longed to meet others to create new art and music with. She watched as the Princess started to build a great beacon, hoping it would draw visitors to this place. The beacon was incredible, DiaManT would not deny it, but it lacked one crucial thing: a light to shine with. DiaManT showed herself to the Princess, then, and offered her help. She would be the light to shine, and the beacon shot its invitation into space.

DiaManT made sure the invitation would be seen. It reached a treacherous god of water and blood. It reached a mortal pirate who had sailed far beyond Earth. It reached a star that wished to share music and fun. They gathered around the Princess, and they called themselves ‘Partytrashers’. And DiaManT, too, got a special place among them, for it was DiaManT who had seen them all, and who would lead them into their brightest future.