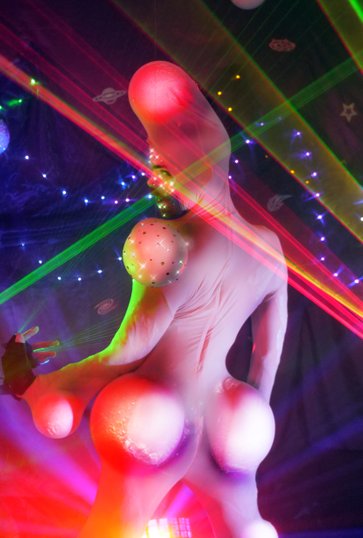 Chapter Four: Highliss - The Patterns in The Stars

There is a place in space where time does not exist. A place that is both ultimate peace and ultimate chaos at once. At the heart of this place there is a nameless planet, and a race of beings not much unlike mankind. They looked somewhat like us, they had languages just like us, and they saw patterns in the stars just like us. The only thing that they did not have, was music. They would look up at their skies and grunt about the patterns of the stars. “The stars look like the trees we get our red fruits from”, “They look like the things that attack us in the fields.” What these people did not know, however, was that they weren’t seeing patterns in the stars at all. They were watching a single star dashing across the sky at such high speeds that it seemed like a million stars. This star’s name was Highliss. Highliss had been there longer than the planet had, but he quite enjoyed its company. The lack of a sun in this part of the galaxies meant that the species on the planet were always able to see him up there in his habitat. And he so loved to perform for them, mimicking the things he could see from afar. “I will pretend to be an apple tree now. And tomorrow I will look like a wolf”. He would dart and spin and dance around, and hope that the species on the planet were delighted.

But after millions and millions of years, the novelty wore off. The species on the planet were less interested in the stars and their patterns now, only glancing upwards occasionally to exclaim “I don’t even know what that pattern is supposed to be”; and Highliss himself was growing tired of having to move around so much. Highliss came up with a plan. He folded himself in half. Then he folded himself in half again. And again, and again, and again. Until he had become the same size as the people on the planet. Highliss made sure to hide his shine as best as he could, and landed somewhere where he wouldn’t cause too much of a commotion. For fifty days and nights (though for this planet, there was no distinction between the two) Highliss walked through streets, squares, forests, and fields, listening to the conversations of the species he had only seen from afar. Highliss could not think anything else than how boring they had all become.

Finally, on the 51st day, Highliss had had enough. He made this know by standing in the middle of the busiest square shouting “ENOUGH!” and letting his brightest starshine shine for everyone to see. The people of the planet rushed towards him, suddenly remembering how much they had once loved seeing this type of light in their skies. “Are you not bored?” Highliss asked of them, and it took them some time to answer because they had never come up with concept of ‘boredom’ before. “You know what, we kinda are.” One of them said, and all the others nodded in agreement. Highliss felt sad for them, but pleased at the same time because he knew how to help the species feel better. Highliss let his light shine and let the happiness within himself resonate until it became a tune he could dance to, and he started to dart around the square much like he used to dart around the sky. The people soon got the idea and they joined Highliss in his motions. “What do you call this?” one of them asked, pointing at his feet as he jumped around. “Dancing!” Highliss answered. “And what do you call this?” one of them asked, pointing to his ears and around him. “Music!” Highliss answered, finding it a bit of a dumb question.

And thus the people of this planet learned the joys of music and dancing. They thanked Highliss profusely and never stopped dancing and dreaming again. Highliss was very happy dancing with them, but when a mysterious beacon of light suddenly shone through space, his curiosity caused him to pursue it…