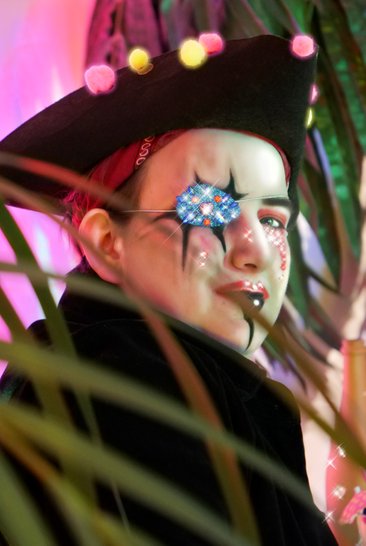 The story of Jimmy Kidd starts where so many of her generation did: in a brothel in a small harbour town. The year was 1729, but not much more is known. Not the names of her parents and not who had given her her own. She grew up along with all the other unwashed orphans, making their way delivering parcels and messages to burly bartenders, shrewd madams, and stoic sailors.

It was in these bars, brothels, and alleyways that Jimmy first found her love for shanties and debauchery. At 14 years old, she managed to lie her way onto a ship as a boatswain, her face seeming boyish enough, and her name not betraying her true gender. Jimmy quickly grew into her new profession and survived a long journey to Havana without incident. In the busy cities of Cuba, Jimmy quickly gained a reputation as a ruthless pirate and gifted songsmith, earning a spot among many pirate crews without the need of hiding her true identity. And after each caper, Jimmy would return to the same pub in Havana and sing of her exploits or make music for all to dance to, well into the night. It is in this same pub, five years after her arrival, that Jimmy met the eccentric and possibly quite mad Captain Corvus, who in history books is often referred to as the dangerous Captain Crow. Corvus offered young Kidd the position of Quarter Master on his ship, The Eden, on the biggest journey ever made.  Corvus’ plan was an impossible one, but it intrigued Kidd none the less: The Eden would sail to the end of the world and then sail right off of it, into space. This way, Corvus claimed, they would be able to sail all the way to the moon, which he believed to be a giant pearl. The greatest treasure any pirate had ever held. If Kidd had not agreed to join Corvus’ crew, it is well possible that the expedition would have never happened. But the respect Kidd commandeered from the other pirates in Havana was greater than their distrust of Corvus’ plan, and soon The Eden had a full crew.

The Eden made its long and dangerous journey to the edge of the world; the point where it dropped off into nothingness. Then, to raucous shouts of elation, the Eden managed to sail on without falling, into space. No longer bound by the laws of gravity, and the workings of the water, Corvus and Kidd steered the ship in the direction of the moon. They arrived there no less than a week later, and The Eden dropped its anchor onto the dusty surface. The crew made camp and congratulated each other over full cups of rum, but Corvus and his Quarter Master would not celebrate with them. Corvus had set of running as soon as they had landed, and Kidd had ran after him. Finally catching up to the captain, Jimmy saw that he was overcome with a great sadness. The moon was not a pearl after all, but just a sphere of dust. Kidd could do nothing to help him, and Corvus soon dropped dead with grief. The command of The Eden was given to Kidd, who soon took off with her crew.  The now Captain Kidd was not ready to return to Cuba just yet, and The Eden went on to explore the far ends of space. On each strange planet where they landed, Kidd would ask those she met their what their songs sounded like, and learned how to play them. Finally, after a thousand years in space, Jimmy Kidd grew tired, and her crew even more so.  They took all that they had learned on their travels back to earth and each went their separate ways. As for Jimmy herself, she had set her eyes on a small town that had shone a bright beacon into space…